Jacobstow (Cornish language: Lannjago) is a parish and village located east of the A39 and approximately seven miles (11 km) south of Bude. The name Jacobstow originates from Saxon times and derives from St James (Latin Jacobus) and Stow (meaning holy place). The parish is on high ground, is entirely rural in character and is bounded to the northwest by Poundstock parish, to the east by Week St Mary parish, to the west by St Gennys parish, and to the south by Warbstow parish. The southwest boundary of the parish follows the River Ottery for approximately two miles.

As well as the many outlying farms, the three main residential areas that have developed in the parish are Jacobstow village (which includes the church, school and Parish Hall), Wainhouse Corner (which has a Public House, shop, garage and filling station) and Canworthy Water.

The current population of Jacobstow (494 persons, 2011 census) is not too different from that recorded over 200 years ago (432 persons, 1801 census) although there was a high of 638 persons in 1831 and a low of 305 persons in 1981. In recent years (and in common with most other areas of Cornwall) Jacobstow has benefited or suffered (depending on your point of view) from an influx of people arriving from elsewhere in the UK. Apart from some very small housing estates, the amount of additional housing that has been built for this increase is mainly of the “infill” variety. 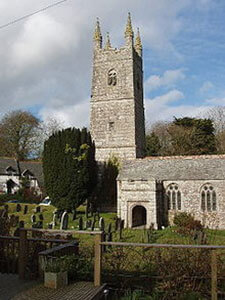 Jacobstow Parish Church is dedicated to St James and there is evidence of a former Saxon church on the same site. The present church is of the 15th century with a nave and chancel and north and south aisles. The three-stage battlemented granite tower houses a ring of six bells and is the second highest in Cornwall. The font is Norman of the Altarnun type and the altar is an Elizabethan communion table. An ancient altar stone is in the south aisle chapel. This was the main altar stone up to about 1550 in the reign of Edward VI when the Church of England was becoming more Protestant and an act required that all altar stones should be removed. This one then became a footbridge over the nearby stream but it was found and moved back to the churchyard as a seat in the 1800s and subsequently installed in the south aisle chapel in 1972. The nails that form the cross on the base of the altar are 15th century and were saved from roof restoration work in 1970.

The six church bells were cast locally in 1769 in the grounds of the old Jacobstow Rectory and of these the tenor bell alone weighs 6cwt 26lbs. The bells were refurbished in 1970 and the ropes (which are 65ft long) were replaced around 1986. 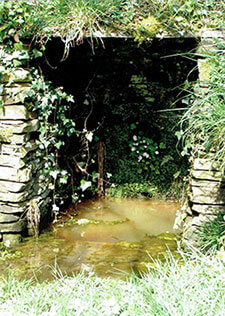 St James Well is one of the lesser known of the Holy Wells in Cornwall and stands in a hollow at the head of a stream that runs past Jacobstow Parish Church. The well itself is a small square stone chamber that is located about 1/3 mile NW of the church near the A39 and conservation/restoration works were undertaken in July 2002. It is believed to be one of the ancient sites adopted by pilgrims on the road from Ireland & Wales to the shrine of St. James of Compostella in Northern Spain.

The school in Jacobstow village has an interesting history in the way that it has developed and the following description gives some idea of the many changes that have occurred. 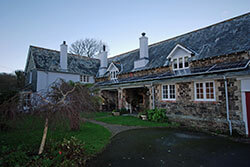 The 1870 Education Act stated that attendance at school was to be compulsory and to achieve this the schools would need to be “properly and efficiently” administered. To fully comply with this aim work commenced on the school building around 1877 - but this was not the first time that reference was made to a school in Jacobstow. An old school room was mentioned in the Vestry Book in December 1836 and the old school (now the Parish Hall) was known to be in use in 1868. Before that a Curate’s report in 1745 stated that “there was no school of any kind in the village” but later (in 1818) a Select Committee reported that there was “an indifferent school of 10-24 pupils”. Mention is also made of the old ‘Dame School’ at Pear Tree Cottage (near to the church) but very little additional information is available about this.

Although the 1877 school (now a private residence) catered extremely well for the local population it did not have the capacity for the additional evacuees that arrived during WW2 and once again, the Parish Hall was pressed into service as an additional classroom. 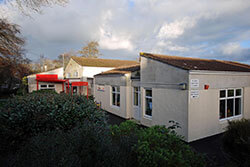 In 1971 the decision was made to build a new school (the current building) which would not only provide education for pupils from Jacobstow but also those from three other parishes (Week St Mary, Poundstock and St Gennys) as a result of their schools being closed down.

Today the nearest shops for residents of Jacobstow are at Wainhouse Corner where everyday essentials can be obtained. However, in earlier days there was a shop at Lower Kents on the road between Ferrets Cross and the Parish Hall. The sign above the door shows that essentials for day-to-day living could also be bought then as well!

Probably the oldest part of the current Jacobstow Parish is Penhallym (in the north of the parish) as this is mentioned (as Penhalun) in the Domesday Book. Within this vicinity was a 13th century moated manor house (Penhallam Manor House) built by Andrew de Cardinham. Moated manor houses are found mainly in central and eastern England, but are rare in the south-west so Penhallam is therefore particularly unusual.

Having been abandoned in the 14th century, its full medieval ground plan has survived unaltered by later building work but all that remains now are low, grass-covered ruins. Further details can be obtained from English Heritage who administer this site. 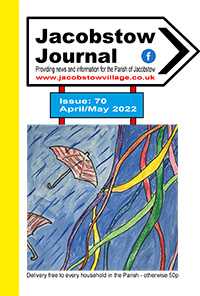